I enjoy working at the interface between the scientific research and technical/operational domains within astronomy and I am keen on projects that involve astronomical instrumentation. Below are some examples of my contributions:

As a Research Fellow in the Gaia team at ESA, I recognised the science opportunity offered by the possibility of overcoming Gaia’s bright limit. We defined a new commissioning activity to test observations of very bright stars where I contributed to the observation planning and analysed the data. We demonstrated the new observing mode and, as of July 2014, the 6000 naked-eye stars are being observed by Gaia (see page on Gaia).

In 2005–2013, I worked on a near-infrared interferometric facility for ESO’s VLT, designed for astrometric planet detection (PRIMA). I was in charge of its central instrument, the interference fringe sensor (Sahlmann et al. 2009), which determines the piston term of the incoming stellar wavefront. It is used both for fast closed-loop control of the interferometer to cancel atmospheric perturbations (fringe tracking, which is analogous to wavefront control in adaptive optics systems) and to collect the scientific data that encodes the astrometric information. As part of a team, I first aligned and tested the instrument, which includes a cryogenic infrared detector system fed by single-mode optical fibres, in an environment at the optical laboratories of ESO that simulated the interferometer’s optical and control system. I then actively participated in the installation and on-sky commissioning at the observatory, where we demonstrated dual-star interferometric astrometry with 2m-class telescopes and reached a precision of 30 micro-arcseconds (Sahlmann et al. 2013).

This picture of me was taken during the alignment of the fringe sensor’s cold optics inside the cryostat at the Paranal observatory on August 1st, 2008. 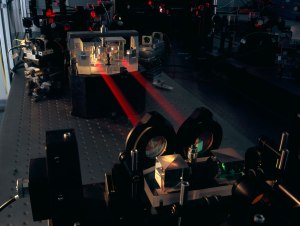 In 2005-2007, I worked on an accelerometer-based vibration compensation system for the 8.2 m Unit Telescopes used for the VLT Interferometer. Stabilisation to better than a tenth of the observing wavelength is required to reach optimal performance of the interferometer’s scientific instruments. However, fast mechanical vibrations due to several sources in the observatory infrastructure couple to the telescope support structure and the mirrors. The mirror motions are fast and large (typically about a wavelength) and must be compensated for in real time. I participated in the implementation and commissioning of a scheme to measure the accelerations imparted to the primary, secondary, and tertiary mirrors of the telescopes via a grid of suitably placed accelerometers. The measured accelerations are converted to optical pathlengths and cancelled by wideband feed-forward compensation to a downstream optical delay line.

This system has subsequently been expanded and is in regular use for VLTI science operations.

Sketch of a VLT Unit Telescope. The three principal mirrors on which we mounted accelerometers are indicated (from di Lieto, Sahlmann, et al. 2007)